Because I could not stop for Death –
He kindly stopped for me.
The Carriage held but just Ourselves –
And Immortality.

We slowly drove – He knew no haste
And I had put away
My labor and my leisure too,
For His Civility –

We passed the School, where Children strove
At Recess – in the Ring –
We passed the Fields of Gazing Grain –
We passed the Setting Sun –
Or rather – He passed Us –
The Dews drew quivering and Chill –
For only Gossamer, my Gown –
My Tippet – only Tulle –
We paused before a House that seemed
A Swelling of the Ground –
The Roof was scarcely visible –
The Cornice – in the Ground – 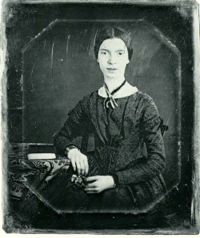 Death of an Infant

And dash’d it out. There was a tint of rose

And the rose faded.–Forth from those blue eyes

There spoke a wishful tenderness,–a doubt

Whether to grieve or sleep, which Innocence

Alone can wear. With ruthless haste he bound

The silken fringes of the curtaining lids

For ever. There had been a murmuring sound

With which the babe would claim its mother’s ear,

Charming her even to tears. The spoiler set

His seal of silence. But there beam’d a smile

So fix’d and holy from that marble brow,–

Death gazed and left it there;–he dared not steal

The signet-ring of Heaven.

Lydia H. Sigourney (1791-1865) The Sweet Singer of Hartford, one of the most beloved, celebrated and popular poets of her generation whose poetry on death and immortality is prolific. 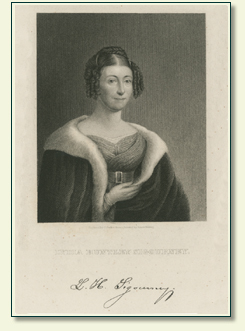 We will meet but we will miss him,
There will be his vacant chair;
We will linger to caress him
While we breathe our evening prayer;
When a year ago we gathered,
Joy was in his mild blue eye,
But a golden chord is severed,
And our hopes in ruin lie.

At our fireside, sad and lonely,
Often will the bosom swell
At remembrance of the story,
How our noble father fell;
How he strove to bear our banner
Through the thickest of the fight;
And uphold our country’s honor,
In the strength of manhood’s fight.

True, they tell us wreaths of glory
Ever more will deck his brow,
But this soothes the anguish only,
Sweeping o’er our heartstrings now.
Sleep today, Oh early fallen,
In thy green and narrow bed.
Dirges from the pine and cypress
Mingle with the tears we shed.

“The Vacant Chair” will never grow old. The Battle of Balls Bluff, VA., in which General McClellan was defeated, was fought on the 21st of October, 1861. In the engagement was the 15th Massachusetts and a lieutenant of only 18 years old, Wm. G. Grout who fought with valor and courage. He was killed in aiding the retreat. Four weeks later Henry S. Washburn, being well acquainted with the young Grout, and thinking with deep emotion of the chair that would be vacant at the Thanksgiving board in the home of sorrow, wrote the words of the song in one of these inspired moments. In a few weeks after the lines were written, Dr. Root set them to music, and international fame. (courtesy of Bill Warren)

Walt Whitman wrote this poem after Abraham Lincoln’s assassination. Lincoln is represented by the captain in the poem and the Ship is the United States itself. The ship has endured all the obstacles such as Civil War and everything is over and there is peace. 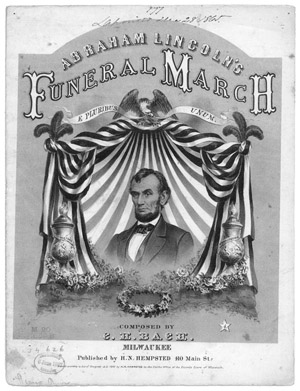 Lines from:When Lilacs Last in the Door-yard Bloomed (on the funeral procession of Lincoln)

. . .Coffin that passes through lanes and streets,

Through day and night, with the great cloud darkeni the land,

With the pomp of the inloop’d flags, with the cities draped in black, 35

With the show of the States themselves, as of crape-veil’d women, standing,

With processions long and winding, and the flambeaus of the night,

With the countless torches lit—with the silent sea of faces, and the unbared heads,

With the waiting depot, the arriving coffin, and the sombre faces,

With dirges through the night, with the thousand voices rising strong and solemn;

With all the mournful voices of the dirges, pour’d around the coffin,

The dim-lit churches and the shuddering organs—

Where amid these you journey,

Here! coffin that slowly passes, I give you my sprig of lilac.

Nor for you, for one, alone;

Blossoms and branches green to coffins all I bring:

For fresh as the morning—thus would I carol a song for you,

All over bouquets of roses, O death!

I cover you over with roses and early lilies;

But mostly and now the lilac that blooms the first,

O Captain! my Captain! our fearful trip is done;
The ship has weather’d every rack, the prize we sought is won;
The port is near, the bells I hear, the people all exulting,
While follow eyes the steady keel, the vessel grim and daring:

O the bleeding drops of red,

Where on the deck my Captain lies,

O Captain! my Captain! rise up and hear the bells;
Rise up—for you the flag is flung—for you the bugle trills;
For you bouquets and ribbon’d wreaths—for you the shores a-crowding;
For you they call, the swaying mass, their eager faces turning;

This arm beneath your head;

My Captain does not answer, his lips are pale and still;
My father does not feel my arm, he has no pulse nor will;
The ship is anchor’d safe and sound, its voyage closed and done;
From fearful trip, the victor ship, comes in with object won;

But I, with mournful tread,

Walk the deck my Captain lies,

Copious, I break, I break the sprigs from the bushes;

4 thoughts on “Victorian Poetry About Death”